One of the things I love most about weddings is seeing the brides face when everything comes together in the end.  But what I love even more, is being able to bring their ideas to fruition without breaking the bank too!

This bride had definite ideas about what colours went where, what details to go in the auditorium verses in the reception and I loved that, it made my job so easy.

For her ceremony she borrowed the wrought iron archway from a friends garden and bought purple fabric to drape on it (at about 2 dollars a metre) with a little bit of borrowed lights and white tulle. 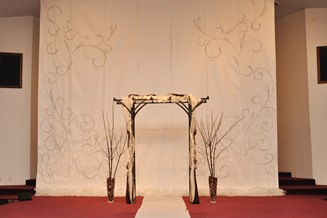 Then she got from a friends house two small trees that we cut to size and dry brushed black to go into two glass vases she purchased from Michael’s arts and crafts store with their 40% coupon-got to love those!

We filled up the vases with pinecones found outside and styrofoam balls spray painted and glittered in her colours.  Again, a big thank you Michael’s for the coupons since we were able to get the spray paint and

The bride had made some icicles from beads and wire.  So simple, quick and easy, yet elegant.  They were hung on both the trees in the ceremony and the centrepieces in the reception.  She also got from Michaels bead garland which we draped around the trees at the front in her ceremony.  Those trees did double duty in both the ceremony and reception.. 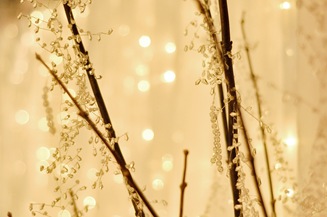 The backdrop was banner paper and I painted a design that was similar to the design on her flower girl basket and book for signing but we did it in a soft grey with tons of glitter so the black would not be over powering.  The paper cost about 35 dollars and the glitter was purchased with a Michael’s coupon; only 9 dollars and the paint was leftovers that I had already, so for under 50 dollars the backdrop was made! 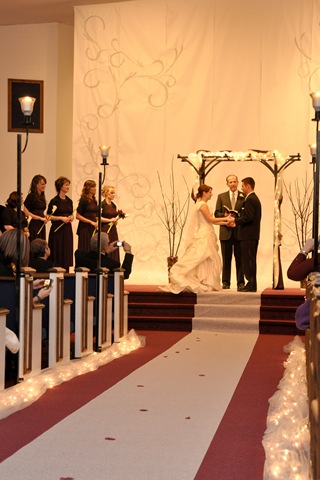 (hubby took this picture for me)

Down the aisle we put my tulle with borrowed lights wrapped inside and used the churches candelabra's.  So only the aisle runner was bought and again Michaels’ coupons were used.  I should say you can print off 40% coupons everyday from Flyerland.com-just have to look for the Michael’s link. 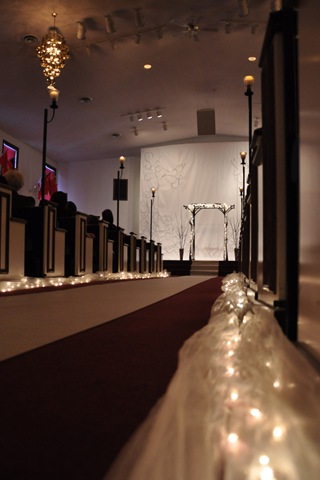 In the gym/reception We borrowed fabric from a wedding I helped with back in December and used again my twinkle lights from Christmas duct taped to the wall to create the backdrop behind the head table.  The bride was able to get table toppers from a Party Linen place in the States-who have the best prices ever!

Check out Linen Tablecloth for some amazing deals and they ship anywhere in Canada!

The same trees in vases were brought into the reception to add a bit of grounding to the almost all white scheme.  White tulle and grapevine from my backyard was used to drape along the top of the wall of drapes and snowflakes hung down at different lengths in front of the fabric backdrop to add dimension and texture. 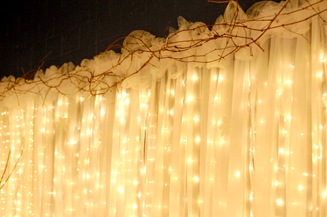 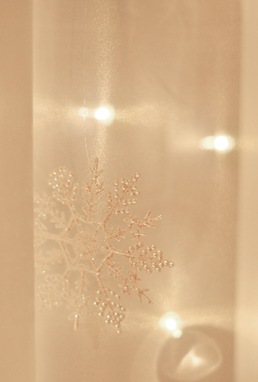 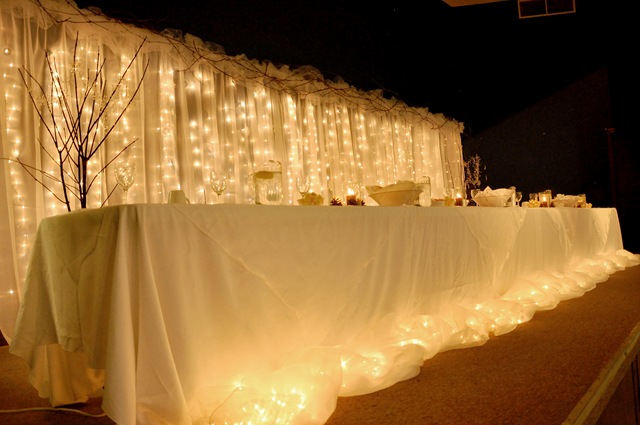 To add more twinkle and ambient lighting we took one of the tulling down the aisle from the ceremony to put in front of the head table.

The centre pieces were twigs taken from fallen down trees in the park near my house and I painted them with glitter paint and glittered them with the same glitter used in the ceremony backdrop so they would really sparkle. 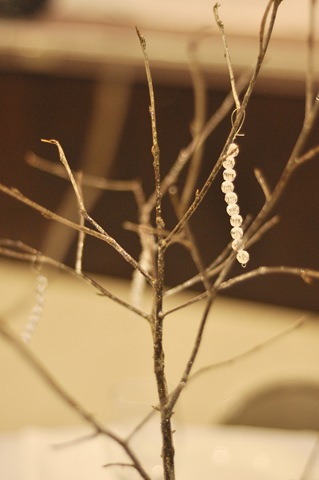 The sticks had the icicles the bride and her ladies made hung on them and we centred them on mirror tiles used from another wedding.  The vases used in the centrepieces were purchased at the local dollar store.  The same pinecones and styrofoam balls used in the larger vases in the ceremony were used to fill. A tiny bit of purple ribbon was used for a pop of colour on the favours. 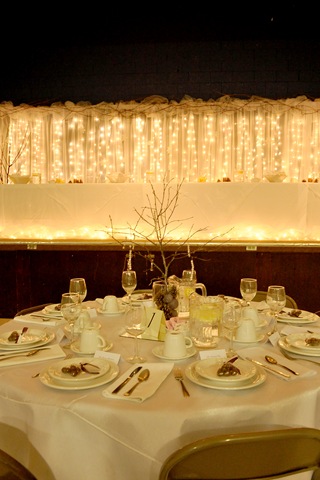 The cake by “Peggy’s cakes” in Blackstock fit the brides scheme so beautifully.. 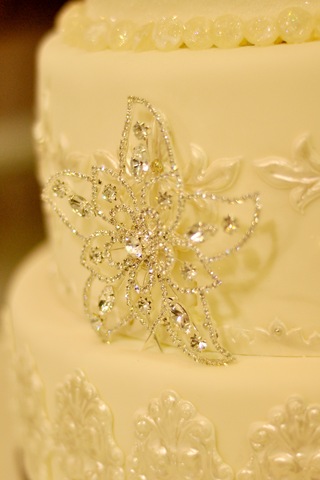 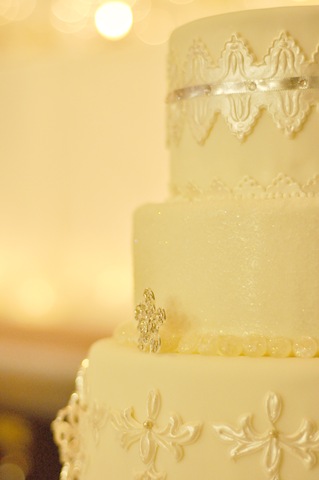 see how one layer is completely glittery? As gorgeous as it was to look at, it tasted even better!

I love that you can have an economic wedding with elegance and style.  It was a beautiful wedding-so grateful to have been apart of it!