Wedding decor when on a budget

A friend of mine’s daughter recently got married, and I had the privilege to help plan and make the decor for her wedding.  The bride came to me with some ideas mostly her colours and a budget, and I came up with decor ideas for her ceremony and reception.   I blogged on it here.

Anyways now that it is over, I can share all the ideas.

The first thing I did to keep the wedding decor on her budget was borrowed as much as I could.  I am very blessed to have a circle of influence who has had weddings in their families and was willing to lend;

an aisle runner, an archway, a huge bag of ivy and miles of tulle fabric!

Then I bought some items used;

I also used some of my own inventory that I have used for other weddings;

like my Ikea curtains-originally bought for the princess canopy when my girls were younger, my twinkle lights-for my Christmas tree, grapevine from my backyard and some various glass vases I have around my home.

Everything else was bought with a coupon at Michael’s arts and craft store or the local dollar store.

I already posted the centrepieces in an earlier post here

so I’d like to show you the detail in the aisle and the ceremony decor.

the church the bride was getting married in was huge, but also very symmetrical, 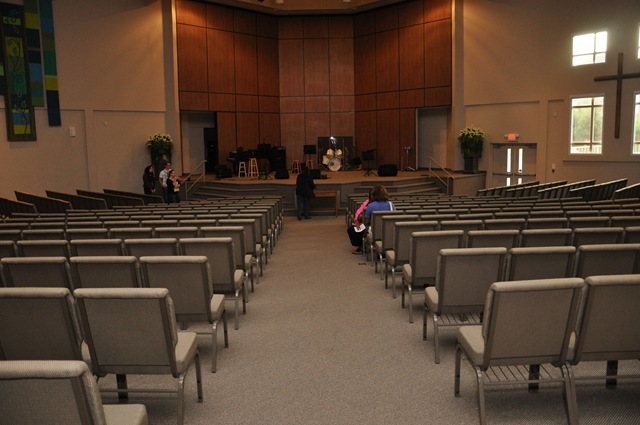 so when you walk into the double doors they lead right down the aisle (like most churches) to where the unity candle was placed, however then you had to go either up to the stairs on the right or left of the altar to get up to it.  So the aisle became very much a focal part.  The other factor was that there was going to be a lot of children in the bridal party so we did not want anything too fragile that could get destroyed.

Michael’s had a sale on scrapbooking paper for .59 a sheet so I bought 14.  I also picked up thin ribbon that matched the flower girls dresses to add as detail on the cones. 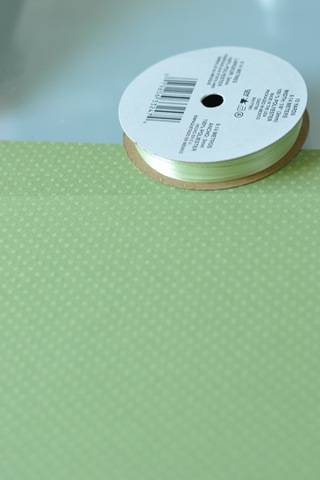 I went a friends house who had a Pee gee hydrangea bush drying up and she let me cut some blooms off.

So they were dried and sprayed to last the wedding day. 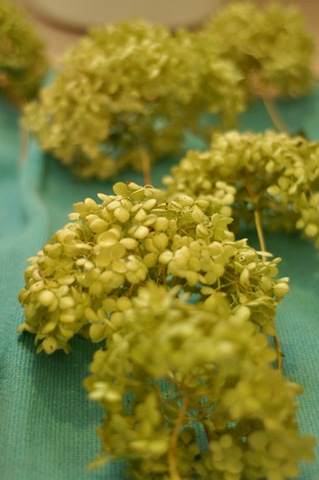 I used a stapler to keep the cone wrapped up together

and a hole punch for the ribbon that would hang the cone. 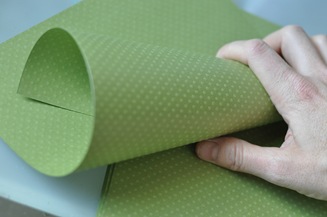 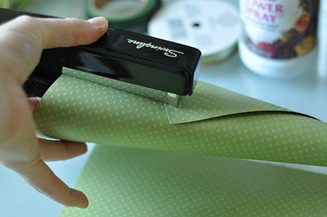 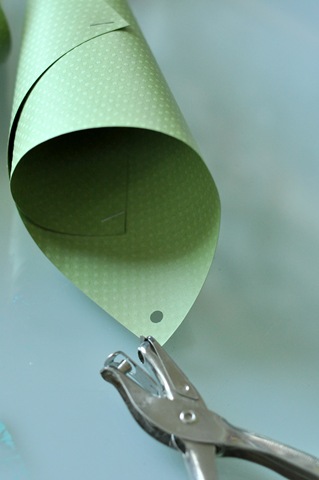 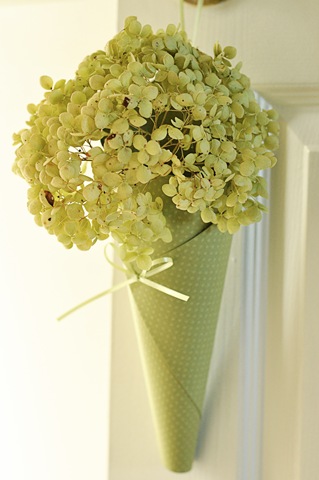 After the tulling was hung along the aisle, I used a safety pin to hang the cones. 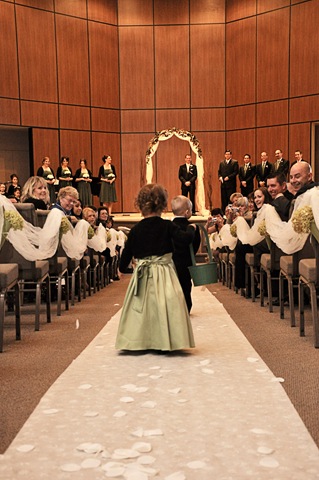 The archway which was borrowed, came with lights to which I added more and then layered with tuiling to soften it. I used the grapevine from my backyard to pull in some brown which was in her invitation (her colours were two tones of green with a little bit of brown).  I also found at the dollar store garland of brown and green leaves with berries on it and sprays of berries which I sprayed a bit of green so they would not look too harvesty.  Although the bride was getting married in October, she did not want it to look too fallish.  But because she was getting married in a church in the fall, the church had existing decor that was fallish so we let some of the original red and orange from the berry sprays show through.  Those along with the leaf garland were placed amongst the ivy and grapevine on the arch.  (On a side note, the ivy was not part of the original design  but was given to me just before the wedding and when I saw that the ivy matched the brides colours I had to use it which came in very handy!) 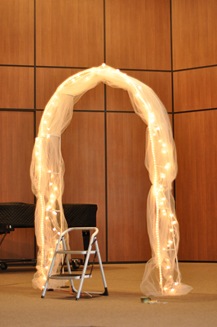 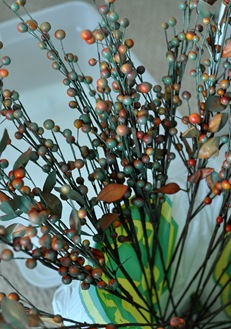 (Sorry cannot post a finished image of the archway until the wedding photo sneak peak is posted because the couple is in all the pictures of it!)

The flower girls baskets came from a thrift store and were originally yellow so I spray painted them the same green that was on the berry sprays and put a darker green wash on them to get them to match the bridesmaids dresses. 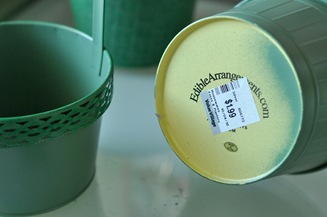 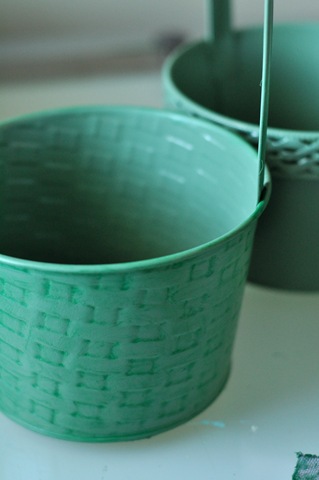 I also found these twigs at the Dollar store that were put into glass vases and they flanked each side of the arch to go with the grapevine in the archway. 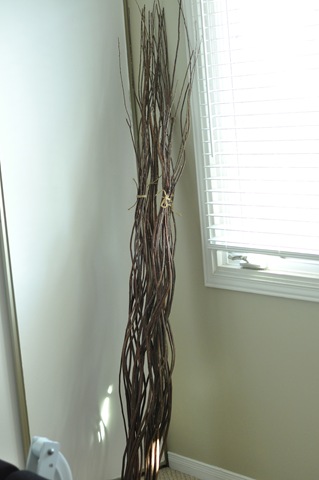 I will add a couple of posts to show you the reception and the flowers for the bouquets.  When all was said and done, $358.34 was spent for most of the decor and bouquets for the wedding.

You are not limited by your budget,

you are limited by your ability to make the best of your budget and your imagination!

Speaking of budgets, I love these sites because

there are some great ideas shared that all fall within a tight budget of some sort. Stop by and take a look…

Nellie's Cozy place said…
what a great idea using the scrapbook paper to make cone holders for the hydrangeas, and then attaching it to the draped tulle. Very Simple, yet very elegant looking!! Very nice you had a friend with hydrangeas too!

I adore hydrangeas and keep trying to grow them but it just never works.
I have had them in practically every area of my yard but to No Avail.
The first time I tried to grow them I did get a fairly nice crop and I loved having the dried ones to use in my house. I sprayed them gold at Christmas and they looked so elegant in my arrangements. Maybe
one day they will be successful,
who knows!! lol

Becky@Beyond The Picket Fence said…
Great ideas--weddings should be done on a budget. Way to go! Thanks for linking up to Beyond the Picket Fence's Under $100 Party.
October 22, 2010 at 12:43 PM

Anonymous said…
Finally, an issue that I am passionate about. I have looked for information of this caliber for the last several hours. Your site is greatly appreciated.
November 14, 2010 at 1:21 AM

Anonymous said…
Great information! I’ve been looking for something like this for a while now. Thanks!
November 16, 2010 at 10:22 AM